The Aeonlith powered the magick abilities of the Wardens for centuries.

Kera is just a young Warden working in the Citadel’s library when the High Council orders her to accompany Jorthen deep into rival territory to find a powerful holy relic. Tensions run high but when they charter a merchant airship to smuggle them across the Disc Sea, she’ll begin to unravel secrets as their covert trip threatens to cause an all out war.

Danny F. Santos is a science-fiction/fantasy author as well as a freelance writer and content creator for traditional and new media. Currently hard at work on the Aeonlith Saga fantasy series, developing a space-opera, as well as writing for several blogs. 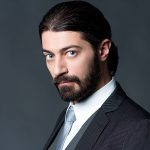 Whenever promoting the book, please link to https://dannyfsantos.com.
When you post a review or promotion, please let us know so that we can add / link to your promotion.

Q: What was your inspiration for the book?
A: The Aeonlith Saga was originally based on two separate story ideas: a science-fiction story set on a human colony on a distant planet and a post-apocalyptic/neo-medieval fantasy set on Earth in the future. After developing both of them off and on, I realized the two stories could intersect each other in a very interesting way set in a more high fantasy setting. They also shared similar enough themes so it just made sense to take them apart and rebuild them into a single story.

Q: What influence(s), if any, did you draw on while writing the book?
A: Strangely enough, the story of Galileo Galilei building his own telescope. The concept of using a device to enhance a natural ability really appealed to me and made sense within the context of magical ability. In the books, a Warden needs to draw on a power source and refract it through a lens. Another influence is actually a Shakespearean play which I’ll leave nameless for now, but it is one of my favorites!

Q: In The Keystone Staff, you’ve crafted an elaborate world rich with history. Did you face any challenges in creating the mythology?
A: I’m still facing challenges! The history of this world very much informs its present day but I found creating a world map really helped craft the backstory outside of just the Disc Sea and its surroundings. There’s a lot that’s only hinted at in the first book which will probably get fleshed out in future books if and when the need arises.

Q: Kera and Jorthen, Fitch and Vessa, Kera and Fitch — there are many character pairings and dynamics fleshed out in the Keystone Staff. Which is your favourite?
A: It’s definitely Fitch and Vessa’s relationship. While they’re not related by blood, they share a sibling relationship developed over the course of penning the book. How they relate to each other was a surprising thing to discover as I was writing.

Q: What can you tell us about the upcoming book(s)?
A: The next book will be called The Gateway Cities and will bring a few new interesting characters into the fold. There’s also a story issue that was brought up several times in The Keystone Staff that comes to a head in the second book. I have major events plotted out for future books whose seeds have already been planted that lead to the series’ ultimate conclusion.

Bonus Q: In addition to the Aeonlith series, you’re also working on an album. If you had to choose a song for each character’s soundtrack, which one would it be?
Jorthen – David Bowie – The Man Who Sold the World
Kera – For Esme – Just Yet
Vessa – Chemical Brothers – Setting Sun
Fitch – Audioslave – I Am the Highway
Yominai – Garbage – Push It
Luindre – Bob Dylan – Blowin’ in the Wind

The Aeonlith hovered in the great hall.

Eight stories tall and blood-red, the stone resembled a blade balanced on its tip, defying the known laws of nature. Jorthen wondered where the stone came from as he felt its power flow through, giving him goose-flesh. His order believed it was given to them by the Gods to drive out the Necromages during the ancient times. Stories to frighten children, he thought.

He walked up the helix shaped stairway that spiralled around the Aeonlith in the Eastern Tower of the Citadel. The cream-colored stone interior of the great hall rose ten stories to a vaulted ceiling with a gallery overlooking the giant stone. The morning light poured in through the windows and refracted off the Aeonlith, bathing the hall in a blood-red glow. Jorthen’s jewel encrusted staff tapped against the steps as he continued to climb the stairs.

His golden hair had only begun to show streaks of white while his beard had become almost entirely gray. His skin was thick and lined from the sun and his red leather armor was worn and scuffed. He reached the gallery, looked down upon the Aeonlith and shivered. A sentinel walked up to him and guided him through the door to the waiting High Council.

Inside the circular room, the twelve member council flanked a throne where the Preceptor should have been found. Instead, Preceptor Fanlorn stood in the center of the chamber with his staff in hand. He stood over six feet tall with a shock of white hair and dark eyes. His face wrinkled like old parchment but he stood as straight as an arrow.

Jorthen walked towards him in the center of the chamber. The Preceptor swept his hands towards the elders of the council, motioning him to speak, and patrolled the auditorium’s circumference.

“Fellow Wardens and members of the High Council,” Jorthen said above the murmur. “I come before you to ask permission to seek the Keystone Staff.”

The council fell silent, leaving only the steady tap-tap-tap of the Preceptor’s staff as he circled the room. Jorthen looked toward him but the Preceptor continued to circle the room.

“Are you informing us you know of the whereabouts of the Keystone Staff?” asked a council member.

“My work with the bibliothecary, Luindre, has yielded the locations of many of the ancient and rare stones located around the world. We believe that we’ve identified the region where it might have been lost after the War of the Heavens.”

The room erupted into a roar as a debate between council members burst forth. A few called for a division of Wardens to invade while the others considered it far too risky to enter the Elderlands. The rest were suspicious the staff could be in Qattan at all. Preceptor Fanlorn thumped his staff on the chamber floor, causing one of many stones to brighten and then dim. The room silenced again.

“We cannot invade the Elderlands without committing the Protectorates to all out war,” Fanlorn said still circling the room. “But, the Keystone Staff is one of our holiest relics and should be recovered. Do you have another way?”

“I do. I’ve traveled the world over and have earned the trust of a few… colorful acquaintances. One of which is an airship captain whose ship is berthed in our city’s harbor as we speak. He can get me inside the walls of Qattan and from there I can search for the Keystone Staff.”

“And you expect us to allow you to go alone?” asked a council member.

“I know the captain of the airship well but persuading him to take me south of the Disc Sea will take much convincing. Try to persuade him to smuggle even a small team of Wardens?” Jorthen shook his head. “I can assure you, is folly.”

“Colorful. Unfortunately, I will need someone with far more knowledge of Qattan and the Keystone Staff itself to locate its precise position.” Jorthen looked around the room. “Thus, I would ask the council to allow the bibliothecary, Luindre, to accompany me on my journey.”

“His expertise is required to retrieve the staff. The records we are working from are damaged and incomplete and no one knows them better than he.”

“I’m sorry, but what you ask is impossible. You will have to make do-”

“What of his assistant?”

The Preceptor stopped circling the room and stood between Jorthen and the throne. Fanlorn turned to face him. Jorthen could tell the Preceptor was appraising the situation before offering a response.

“Her gift from the Aeon is weak, and she has never left the Citadel.”

“But if she is to continue Luindre’s work once he’s passed, should she not see at least part of the world?”

Fanlorn paused. She is young and inexperienced. Her first foray into the outside world should not be to a place where Wardens are executed on the spot, Jorthen thought. But that cannot be helped. Fanlorn walked to his throne and sat down.

“Let the council choose,” the Preceptor said. “All in favor of Jorthen recovering the Keystone Staff, say aye.”

The council was in unanimous agreement.

“Those in favor of the acolyte, Kera, to accompany him, say aye.” Only seven members gave their support, but it was enough.

“The council has spoken. Jorthen, you are charged with the retrieval of the Keystone Staff by the High Council of the Wardens of Aeon. Accompanying you will be the acolyte Kera whose knowledge may help you find the staff. Go.”

“Thank you, High Council, for seeing me and allowing me to serve Aeon.”

Jorthen turned and left the room. He walked to the edge of the gallery and looked down upon the Aeonlith, goose-flesh once again crawling along his arm. He stepped away from the overlook and made his way along the spiral staircase to the ground floor.

He smiled. I got everything I wanted. Jorthen went to gather his belongings.